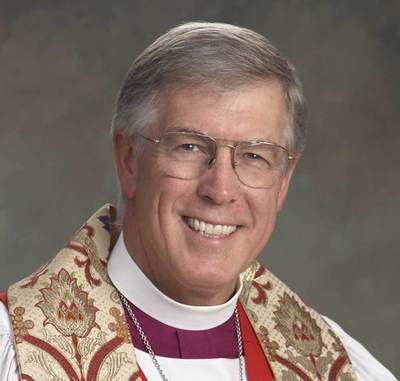 St. Paul's is proud to welcome The Rt. Rev. Duncan M. Gray III to our staff as Bishop in Residence. Bishop Gray and his wife, Kathy, will enjoy their first Sunday with us on March 29, 2015, Palm Sunday. We invite you to help us in welcoming them at a festive potluck following the 10:00 am Palm Sunday Liturgy.

Bishop Gray retired in January, 2015 as the ninth Bishop of Mississippi. He was elected bishop coadjutor (an assistant bishop) of the Diocese of Mississippi in February of 2000 and was consecrated in June of that same year. Gray served under the Rt. Rev. Alfred Clark Marble and became the diocesan bishop in 2003 after Marble's retirement.

Gray is a native of Canton, MS and son and grandson of former Bishops of Mississippi. Gray graduated with a Bachelor of Arts degree (magna cum laude) from the University of Mississippi in 1971; received the Master of Divinity from Virginia Theological Seminary in 1975. In the Spring of 2001, during separate ceremonies, Gray received honorary Doctor of Divinity degrees from both the University of the South and Virginia Theological Seminary. Gray was ordained to the diaconate in 1975 and to the priesthood in 1976. Gray was rector of St. Peter's, Oxford, from 1985 until the time of his consecration. Prior to this post, he was associate rector at Church of the Holy Communion, Memphis (1982-85); chaplain/assistant headmaster at Trinity Episcopal School, New Orleans (1978-82); curate at St. James', Greenville, Mississippi (1975-78); and legislative aide to U. S. Senator Mark Hatfield (R-Ore.) (1973-74). Gray was a seminarian-in-training at Trinity, Hattiesburg, and did field education and work as youth director at Church of the Ascension, Silver Spring, Maryland.

Gray's work on the diocesan, provincial and national levels has been varied. Gray has served as three-time deputy and chair of the diocesan deputation to the triennial General Convention for The Episcopal Church before his election as bishop. He has served on the National Task Force for the Prevention of Sexual Exploitation. He was a member of the Joint Committee for the Nomination of the Presiding Bishop and a founding director of the Gathering of Leaders. He has served a member of the Board of Directors of the College for Bishops, the Standing Commission on Evangelism and Domestic Mission, and the Episcopal Church's Court of Review. Before being elected bishop, Gray chaired the diocesan Commission on Ministry. He served for many years as director of summer camping sessions at Camp Bratton-Green. Gray also chaired the diocesan Task Force on Small Church Development. He served two terms on the Executive Committee and Finance Committee. Gray was a participant in and served on the board for the diocesan Honduras Medical Mission and added a Medical Mission to Panama during his episcopate. During his episcopacy he also initiated mission work in both Uganda and South Sudan. Gray has chaired the diocesan Clergy and Wellness Committee, the Division of Youth and the Commission on Peace and Justice.

As bishop, Gray led the Diocese of Mississippi into an ever deepening understanding of a vision of "One Church in Mission: Inviting, Transforming, Reconciling." He challenged the diocese to a deeper faithfulness with a series of teachings and program initiatives that encourage "out of the box thinking" to effect the mission imperatives of the church of Jesus Christ. He has a particular interest in development of different models of leadership to address the challenges of the church in a post-modern era. As the state of Mississippi has moved through significant anniversaries of the Civil Rights Movement, Bishop Gray has, through pastoral letters and the sponsorship of a number of iconic events around the state, challenged the Episcopal Church to recommit to the goal of racial justice and reconciliation.